Reprinted from Biz Matters by Simply Clear Marketing & Media on September 12/13, I wanted to share the positive experience I had while traveling in the Chicago, IL area. A bonus is when you meet someone from home. The No-Hitter opportunity is when you discover a story that links to home — even marginally — that can be shared locally once home from vacation. 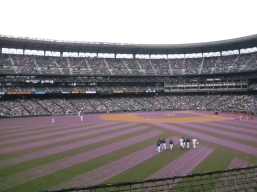 I have this thing about going to baseball parks. I don’t really watch most sports (except NASCAR) until the final series so I booked a trip where we would visit five ballparks within a week. It was a tour offered by America By Rail that allowed us to attend high profile games towards the end of the season and see several communities we had not yet explored. So with all handled except the extra time we spent in Chicago, we saw some great games and ultimately recognized names during the playoffs of 2018 that we had seen play. But the hit-it-out-of-the-park bonus was meeting Lowell Bassett — a treat and a memory to be shared.

You meet the most interesting folks while traveling – sometimes with direct connections to the Central Coast. This reporter traveled all the way to Chicago only to meet-up with Michael Motta, a retired elementary school principal from Fresno who spends half his time at his home in Cambria and then there were the Bassetts – Lowell, DeAnne and son Douglas. Over the years they have visited DeAnne’s cousins, Genie and Lee Pando in Cayucos. In fact, recently they checked out the Pando’s remodeled home near the Cayucos Community Church, but the couple’s most vivid memory was the year the Tsunami hit in 2011.

There were 43 of us on tour with www.americabyrail.com. In trains sporting dining and observations cars, we looped major-league baseball parks featuring the Chicago Cubs and White Sox, Milwaukee Brewers, Kansas City Royals and St. Louis Cardinals. Milwaukee and St. Louis have energized their downtown’s economies with new ballparks, while the “Cubbies” still play Wrigley Field, a modernized gem of tradition.

Our guide Dennis Fedor was a retired Amtrak conductor so knew how to navigate us through the summertime travel maze, but baseball history, stats, and even insider stories were shared by fellow-fans on tour particularly Dennis Smith, a retired librarian from Bowling Green, OH. He spent his early years playing college baseball at Miami, OH, then minor league ball, but never got the call to the majors. Additionally, John Baxter shared his baseball expertise, a lifelong student of the sport from Mendham, NJ traveling with wife Ellen.

But the most memorable story was told by Lowell Bassett. Once a year during the mid-1960s he began a 37-year history singing the National Anthem and America the Beautiful 48 times for the LA Dodgers. He recalled when Dusty Baker helped the Dodgers win pennants in 1977 and 1978 and became World Series champions in 1981.  Basset recalled, “Dusty once remarked how I had the brightest blue eyes not knowing I’d just gotten contacts.

Bassett continued, “I’ll always be a Dodger fan. They respected their people. Even singers got the good seats. The first 14 years I sat next to the dugout.” He proactively got the 40-year gig himself. “My son’s piano teacher knew the manager of the LA Lakers. After I passed their audition and sang for them, I decided why not call the Dodgers? Since I sang at the Lakers I was invited to give it a try. A favorite night was being there when Fernando Valenzuela pitched his no-hitter.”

Once they offered Bassett a perk to switch his annual singing date. He could invite 20 of his family and friends to a $3,000 Dodger hospitality suite with all the trimmings — Dodger-dogs and more. “I agreed. A Little League team was hosted that night. The kids were all introduced to the players on the field before the fans. Two of the kids couldn’t make it so they asked if my boys wanted to join the group.”

Whenever he sang, Bassett wore a coat and tie. “They’d show me on the big screen when I sang. One night a kid came up and asked for my autograph. I tried to tell him I was nobody, but he recognized I was part of the show.” His favorite players were 10-time All-Star Steve Garvey, nicknamed “Mr. Clean” for his wholesome image and famed pitcher Orel Hershiser, who helped the Dodgers win the World Series in 1988. Why? Bassett said, “They were always friendly.”

Bassett loved sports and even played basketball on two teams that went to Nationals – one while studying education and music at Pasadena College and the other while serving in the U.S. Army, but he felt he got his biggest career break one semester in college when he met Ted Bahu. “I never heard the guitar played like that and he showed me how.” This brief encounter served him well for 48 years as a youth music minister and elementary school teacher in California and Oregon.

He has fond memories of teaching famed cartoonist Charles Schulz’s children. Schulz was head of the PTA and asked Bassett to be the spiritual advisor for the group. He agreed “only if I could do some good” so he regularly read a Bible chapter and sang. “For nine months,” he said, “there was standing room only at the meetings.” Schulz also created a treasured cartoon strip featuring Linus and Lucy at the PTA meeting where he delivered “joyous news.”

In 1993 Bassett retired from teaching. He and DeAnne relocated from Camarillo to Sun City, AZ and took their music ministry on the road through 38 states and three Canadian provinces. Most often they would be invited to participate in Sunday services. “We had no schedule, but always had a place each week to park our 40-foot motorhome. We met many kind and generous people.”

So it was on an Amtrak to Kansas City to watch the KC Royals play the Detroit Tigers that Bassett said, “I almost gave up on them (LA Dodgers) a month ago, but they’re coming back.” He smiled a smile that made everyone around him feel good. His blue eyes seemed to flash back to half a century of memorable moments at Chavez Ravine singing, “…And the star-spangled banner in triumph shall wave O’er the land of the free and the home of the brave!” Applause, Applause! Let’s play ball!