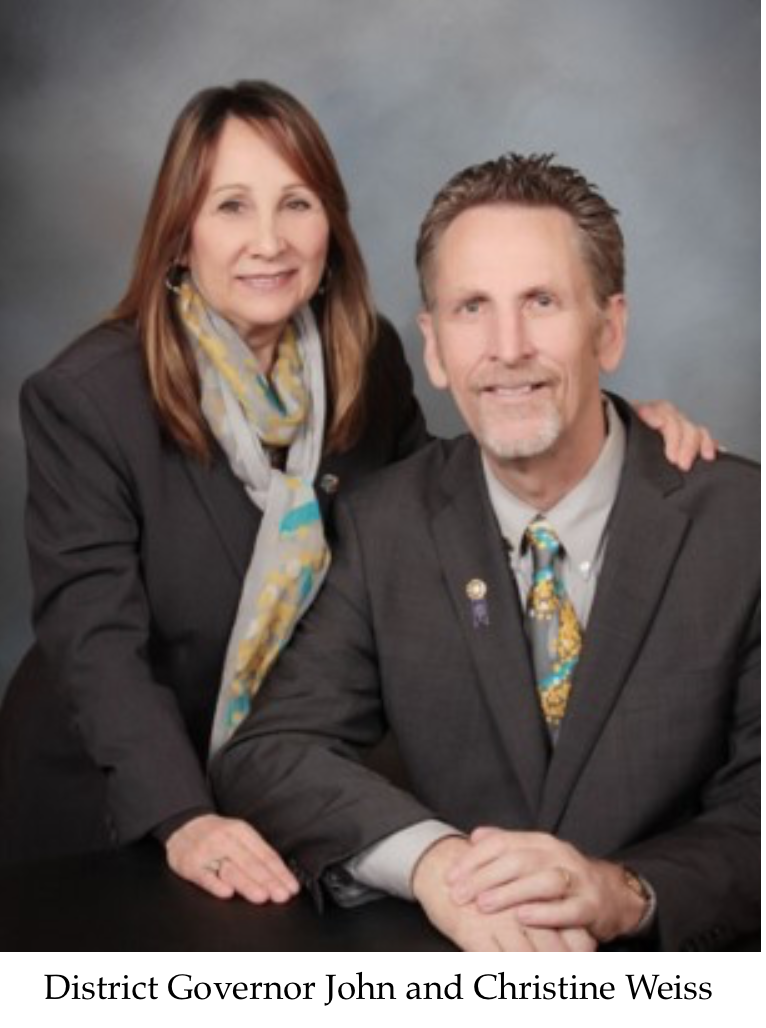 Professionally, Weiss has owned and operated Coast Electronics, a consumer electronics retailer focused on customer service in Morro Bay for 39 years expanding recently to San Luis Obispo and Buellton. “I joined Morro Bay Rotary in 2001, which led me to serve on the Chamber of Commerce board in 2003.” Weiss was Chamber board president 2006-7-8 and 2011. “When you give back to your community your business, family and community will benefit.”

A three-year training program prepares DG’s to provide leadership, motivation, and guidance to Rotary clubs under the general supervision of the RI Board of Directors, but first they’re trained to serve as club presidents before consideration to serve at the district level. Weiss was club president in Morro Bay 2009-10. A few highlights of his year were creating the ongoing Public Heroes program recognizing non-Rotarians serving Morro Bay, reinvigorating a golf tournament to include high school golfers, establishing Eco Rotary Clubs in Morro Bay and Pismo, and chartering a college Rotaract and a high school Interact club. His focus on youth and membership services was noticed by District Governor Deepa Wellingham, who invited him to serve on her team in 2010-11.

Based on a record of service, a district governor candidate must be invited. Campaigning will disqualify a nominee. After serving at the club level, then four years at the district level, Weiss was nominated by Morro Bay Rotarian Jeff Jones. He was interviewed by a panel of twelve, RI’s parliamentarian and two past DGs. Once selected training intensified. Weiss explained 535 global DG nominees convened at an International Assembly in San Diego. “It was five days nine to five and they take roll daily.” He has also participated in district training sessions for the 74 club president nominees for the past two years. His team plans the training meetings for 2017-18.

By the end of his DG year he will have presented at all 74 district clubs, chaired an October celebratory District Conference and inaugurated an Interact Conference as well as attend numerous club socials and fund raising events logging untold miles and time away from business and home. “Most DGs have completed their club visits by November,” said Weiss. “With an active business I’m a working district governor so I’m scheduling them out through the year. Luckily I have a scheduler, Deb Linden, to get me where I need to be, who I’ll see and what to wear.”

The good news is a DG selects a staff of 50 to help plan, executive and support district activities. Weiss’ SLO team members include Deb Linden, Michael Boyer, Connie Henley, Jeanne Potter, Mike Pond, and Melinda Thomas. “Assessing the president nominees, it was huge that 75% wanted to focus our year on Youth Services, which has been my passion for two years.” The better news is “My staff is amazing.” Their goals include networking millennials and baby-boomers to refine ideas and future action plans.

The best news is the support Weiss has from his wife Christine McDonald Weiss, “You need the support of your partner before going down this road. Christine has been at my side during all the training while running her successful realty company. She’s picked up so much, which is a testament to Rotary’s training for leaders and their partners.”

Now ready to serve, Weiss advocates, “The business of Rotary is to bring smiles in our community – our world — and that’s all the payment we need.”