Earlier 2018 The Shell Shop: Looking Back was published as my Then & Now Column for Simply Clear Marketing & Media http://www.simplyclearmarketing.com The Bay News, Coast News and SLO City News. 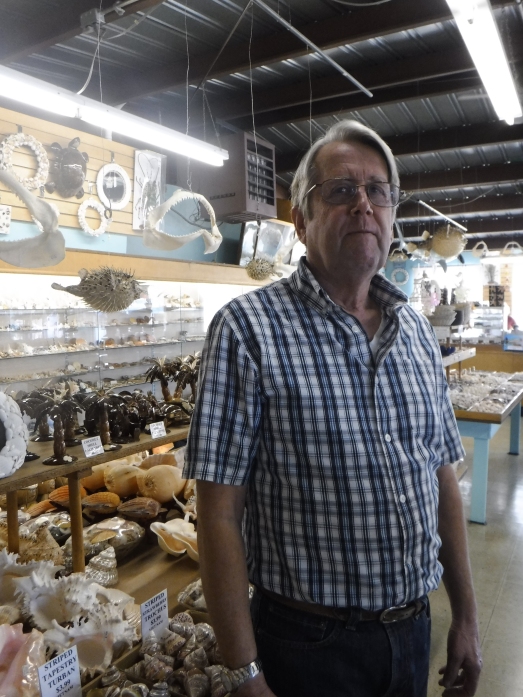 Somewhere in the world someone is planning their vacation to the Pacific Coast. If they collect shells, Google’s top recommendation is The Shell Shop at 590 Embarcadero in Morro Bay.

“We are told we are the largest shell shop on the West Coast,” said owner David Thomas. With a storefront full of displays, multiple shelves of shells in the back of the shop and warehouse down the block, he guesstimated their inventory includes over 1,000 species of shells – tens of thousands of shells from tiny to huge. Indeed, one of Morro Bay’s tourism magnets owned and operated by the Thomas family in the same location for 67 years. “All of our shells are first caught for food. The shells are simply the by-product. Our family made an early decision to stock a wide variety of quality shells – many collectables.”

Customers travel here from all over the world, explained Thomas. Many say they bought shells at The Shell Shop when they were kids. Their children have saved their pennies to buy a vacation souvenir. Since 1955 the Thomas family has developed relationships with fishermen, shell traders and collectors worldwide while exchanging treasured shells and sharing family stories. And yet, the most asked questions are ‘Where’s the restroom?’  ‘What’s your favorite restaurant?’ and ‘How do you put a hole in a shell?’

It all started because David loved shells. At age ten instead of selling lemonade on the corner of Morro and Marina, he sold abalone shells. He made a $100 that day, a bonanza back then. His parents, Lawrence and Louise Thomas, supported their son’s budding entrepreneurial business by building him a stand that he’d work weekends and summers.

“Dad was a fisherman and during World War II he contracted with the Navy to fish the Pacific Coast. At one point the northwest winds at sea were horrendous and he stopped over at Morro Bay. It was sunny and beautiful.” In 1947 Lawrence Thomas moved his young family from Northern California. David was three. His sister, Beryl, was six. “Dad purchased a narrow lot that extended from Morro to somewhere in the middle of the channel. I remember an ugly green log cabin and nasturtiums all around.” They built the shop in 1955.

David was in the first graduating class of Morro Bay High School before serving in the Navy off shore near Vietnam. He then attended Cuesta College focusing on business administration. However, he said the family learned the shell business the hard way – day-by-day, one customer and wholesaler at a time. They learned to treasure their customers while building a worldwide network of shell collectors. Buying direct was better than working with wholesalers. They quickly learned to check product offerings closely. “In the early days shells came in sacks. One wholesaler came in and the shells looked great. When we emptied the sack we found rocks and other junk below the top layer of shells.”

The Thomas’ started taking buying vacations. “In the 60s Morro Bay was dead during the week so Dad and I would take fishing trips and buy shells in Mexico,” said David. They loved the people and products of Manzanillo, Mexico. David married the love of his life, Justine, who traded her life in Hollywood at the William Morris Talent Agency to travel the world and sell shells in Morro Bay. The couple preferred the tropics. David loved the Philippines. His parents, Lawrence and Louise, preferred South America and South Africa. “The rarest of shells came from the tip of South Africa where the warm waters of the Indian Ocean merged with the cold waters of the Atlantic and Great Whites discouraged shell diving”

Most of the time, however, “We did what we needed to do. Dad and I worked in the back processing the shells. Shells came shipped in large containers — often with smelly creature remains still left in.” David recalls one large delivery came to the SLO train station and the station master called and demanded immediate pick-up. He didn’t have room to store or the stomach for the smells. When abalone shells were abundant in the 1960s, they had to sandblast them. Normally, shells required cleaning with soap and water.

Lawrence fished and worked the shop with the family. He and Dean Tyler, owner of the Morro Bay Aquarium across the street, were good friends and often business partners. David recalls they secured the permits to selvage artifacts from the 1923 Hondo Point Disaster, when seven destroyers ran aground in the fog off Point Arguello – still the largest peacetime loss of Navy ships. Both men came home with large anchors and other

Another piece of history is their 1960s Retro sign. “We were down in no-man’s-land to attract customers on the Embarcadero,” said David. “We lucked into a sign shop that had a Shell Gas station sign taking up space. Eventually the lighting went out. I was afraid to fix it or the city would consider it a new sign and I’d lose it. One day Mayor Yates asked why it didn’t work. He offered to grandfather our then oversized sign so it met code. Nice folks at City Neon retrofitted it for a good price for us.”

Customers tell me they like to come to Morro Bay for our quiet, quirkiness and unique harbor. “I have a great crew today. Katie Fortman is our manager, Tony, Connie and Vicki. They’ve been with us 12 to 30-some years. Like our customers who’ve come for generations, they are family to us.”