Living the dream is not the same as living on easy street. Just ask Chef Leonard and Midge Gentieu, owners of Morro Bay’s luxury dinner cruise yacht, the Papagallo II. “From ten-years-old I wanted a boat. We were seven kids and couldn’t afford a rowboat. My dad said if I didn’t drink or smoke until I was 18 he’d buy me a boat. I didn’t, but he died when I was 14.”

Gentieu’s other dream to become a chef was not favored by his father. “But he gave me words I always try to live by whatever I do in life – he said ‘If you want to be a cook then be a cook, but be the best cook.’”

Documented in his autobiography Chasing the Heat 50 Years & a Million Meals, Gentieu graduated with honors from New York’s Culinary Institute of America in an era when you had to earn your stripes as a chef. He literally earned those stripes while serving two three-star generals in the U.S. Army. During his career, he has also owned and operated five restaurants and has been an executive chef for restaurants, resorts and clubs throughout California.

He models “the guy that does the work gets the knowledge” and believes the restaurant business was his perfect apprenticeship to survive and thrive for ten years navigating guests circumventing Morro Bay. Then there are the times he must travel outside the bay for regular U.S. Coast Guard and Morro Bay Harbor Patrol requirements. 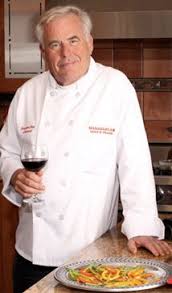 At age 56, Gentieu found his “boat” while working as executive chef at Linn’s Restaurant in Cambria.  During time away from the kitchen, he’d park dockside in Morro Bay and plan – or dream – about his future business. “I’m a fan of motivational books like Zig Zigler’s. I’d see my yacht docked instead of three fishing boats. I started saving. Midge and I would plan travel around checking out yachts for sale. When I found the Papagallo, the broker asked me what I was moving up from. He was not impressed when I said a kayak, but the owner Ernie Gabiati, the founder of Gallo Salame, liked that I wouldn’t change the name and we wanted to offer quality entertainment on board. Midge was not too excited, but sometimes you have to believe and take that calculated risk.”

Once sailing their new yacht on San Francisco Bay Midge said, “I could get used to this,” but the 19-hour cruise to Morro Bay made them question their sanity. 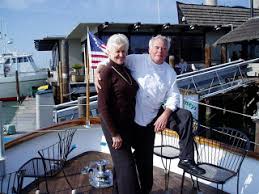 Along with several other chapters of challenges and successes, their first cruise home to Morro Bay is one of 24 “day(s) from hell” chapters he recounts in his debut book – readable as if audible with him standing behind his fully stocked bar serving a favorite Central Coast wine and musing about the life and times of Chef Leonard Gentieu, a life well lived.

What’s next? Gentieu is visualizing a B&B yacht with several berths offering the good life with cuisine on deck viewing another somewhere along the Pacific Coast.

Meanwhile, small group charters are available on the Papagallo II.  Contact www.onboardnauticalevents.com or call (805) 771-9916. You’ll enjoy booking with Midge and cruising with the Gentieus.

Editor’s Note: That being me!! If you haven’t travel with Len and Midge, you are missing a treat. Cruising Morro Bay, hearing a Chef Len tale — not tall tale, but adventures with Chef Len — is worth traveling to Morro Bay, CA. And besides, he and Midge are good people, good neighbors and active citizens making a difference in their community.

Thanks for your ideas, insight and support of the newly opened Morro Bay Maritime Museum — located at 1210 Embarcadero almost directly across the bay boulevard from where the Papagallo II is docked.

This is reprinted from the San Luis Obispo By the Bay Monday column featuring people and activities of Morro Bay, Cayucos and Los Osos, CA in San Luis Obispo County along the Pacific Ocean Coastline written for years by Judy Salamacha.