Editor’s Note: This was published in Biz Matters September 26-27, a product of Simply Clear Marketing & Media. Exciting for this reporter to be part of the later developments of this project. It remains open free to the public on Saturdays and additional days as volunteers are developed to be there. It is definitely worth the stop-by to see for the entire family. 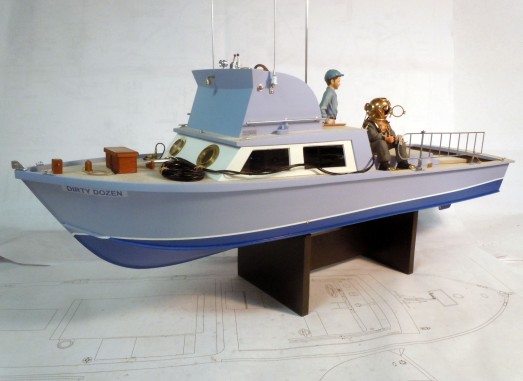 Just one of the many models showcasing the Maritime History of the Central Coast. This one is a replica of the Dive Boat owned by Harold Biaggini created by master modeler Ken Foran, now a resident of Morro Bay and member of the Morro Bay Maritime Museum.

Meandering northwest towards Morro Rock in Morro Bay, visitors are attracted by the protruding nose of a submarine just south of the power plant stacks. A stop to take a photo of the DSRV Avalon becomes a must. They discover three historic vessels on display at California’s newest museum, the Morro Bay Maritime Museum.

Saturday, September 29 the public was invited to a grand opening of MBMM’s first interpretive center at 1215 Embarcadero. Saturdays are now open with free admission at least through December 31 to thank and celebrate 25 years of visitor and community support as the concept developed from dream to opening.

The festivities include proclamations from Morro Bay’s Vice-Mayor Marlys McPherson and San Luis Obispo County Supervisor Bruce Gibson. Local Historian and Tribune’s Times By columnist Dan Krieger will offer anecdotes about SLO County’s maritime history, the Salinan Tribe will conduct a blessing of the grounds and Jenna & the Funky Fellows will entertain before the public is invited to tour the building’s interpretive displays.

Memorial bricks are dedicated to fisherman, area families and organizations and an anchor monument honors Bertha and Dean Tyler and the 43 charter members that helped fund MBMM.

Looking back long-time president of the board Larry Newland shared how it all started. “It’s 1988 and I am sitting in my kayak alongside my friend Brent Roberts who is sitting in his kayak at Coleman Beach on the Morro Bay waterfront. Brent is telling me about his dream for a maritime museum for the town. He mentions all the history of the fishing industry, the abalone divers, and even the Navy.

“We need to preserve that and have it available for the public,” he says. As we paddle out into the bay I look back at the waterfront and in my mind’s eye I can see the past; fishing vessels tied up to the docks, divers working in the rich waters, and even that time during World War II when Morro Bay became a Navy town.  “Yes, I think, we need a Morro Bay maritime museum.”

The mission statement of the Central Coast Maritime Museum Association is to provide an easily accessible educational venue for maritime history, science and technology. “CCMMA brought the Endeavour, a magnificent tall ship replica from Australia, to Morro Bay. We were the first to arrange for these sailing replicas to come here and because of that hundreds of school children as well as adults had the opportunity to learn about maritime history.” In 2015 MBMM hosted San Diego’s Maritime Museum’s maiden voyage of Cabrillo’s San Salvador. Each visit more than 10,000 toured with volunteers acting as tour guides and docents. “The public obviously has a real interest in the culture of times past.”

The tugboat Alma was one of the first donated in 1995 by the Kelsey family, owners of Sylvester’s Tug Service. It was built in 1927 in San Francisco and is typical of the small wooden tugs that worked in harbors along the west coast during the first half of the 20th century.

“When World War II was thrust upon this country, vessels that plied the coastal waters were anxious about possible attacks from Japanese submarines. Such an occurrence happened on December 23, 1941 when the Union Oil tanker Montebello was hit by a Japanese torpedo and sunk off the coast of Cambria. The Alma was anchored off Cayucos and upon hearing explosions went to investigate and found survivors from the tanker in lifeboats. They rescued 22 men from those boats.”

Newland indicated that a grant from the Hind Foundation provided the funding to restore the ALMA. Two additional vessels being restored are part of the fleet to be displayed. A locally crafted small submarine and the Spindrift, built in 1933, is the only surviving Monterey style boat used from the 1920s through the 1960s.

“Once the city (Morro Bay) was on board momentum began to fast-track,” Newland commented. A slice of the power plant parking lot was designated and the fleet moved to their permanent location 1215 Embarcadero in 2015. Also on display is a 30-foot Coast Guard Surf Rescue vessel and the 50-foot Deep Submergence Rescue Vehicle Avalon.  Many people don’t realize that Morro Bay was a naval station during World War II, so obtaining a vessel like the Avalon for the museum fits our purpose.”

On loan from the U.S. Navy the Avalon arrived in Morro Bay in June of 2012. “It is one of only two rescue submarines built for the Navy and was designed to rescue crews of downed submarines. It was used for research and conducted training with Naval operations around the world. More than $10,000 was raised to obtain the vessel and bring it here. Many volunteers were involved in the process including Congressperson Lois Capps and Morro Bay mayor Bill Yates.”

“Brent Roberts passed away in 2005, but I am sure he is watching the progress of the Morro Bay Maritime Museum,” concluded Newland.