May 19, 2018 the SLO (San Luis Obispo) Sisters in Crime invited me to give the Welcome for their first annual conference. I was honored and it forced me to ask the conference’s thematic question “Why I Wrote,” which led me on a journey to remember how I finally got to where I wanted to be – a writer writing an author published. Slightly modified I’m sharing it on my blog for readers to get to know me a bit better as I continue to post past published articles hoping the reader will enjoy.

President’s Weekend February 14-17, 2019 it is an honor to be accepted again as a volunteer for the San Francisco Writers Conference. This year I am especially honored to support the inaugural efforts by Director Laurie McLean and her team — although they have many years of guiding this amazing writers conference. https://www.sfwriters.org.

When I was very young my best friends were my paper dolls who humored me as I created stories about their lives. In grammar school, I won a poetry contest and seeds were planted to someday become a writer. In Junior High, my graduating peers gave me a newspaper bannered with a fake news headline stating I would thrive as a journalist. In high school, I lived two lives – junior journalist behind the “pen” on the school newspaper and social butterfly performer cheerleading for Garces Memorial High School’s sporting events. At Bakersfield College, I contributed and assisted the professor who edited the college’s Literary Magazine.

I chose to transfer to Northwestern Journalism School because it was the best, but I had to settle on UCLA after my mother offered the only career discouragement I can remember her giving me, “Judy, you don’t pay attention to the details.” At UCLA, I was diverted from a a straight pathway to reporting for the LA Times or San Francisco Chronicle. I became a generalist testing our a variety of specialties in English and History. I enjoyed changing gears and lacked confidence to focus on communications classes and creative writing

Cayucos Senior Center Monthly Potluck: Mom was such an inspiration, including her decision to move to Cayucos at age-80 then volunteer to coordinate the volunteers and operations at the Center. She was honored as SLO Volunteer of the Year and other amazing awards.

After graduation, I became a career gypsy. I didn’t realize my bouncing from one entirely different career to another was hands-on research – prep for a future writing career. I was an English teacher, marketing and public relations VP for a land development corporation, radio talk show host, television executive, and an auto-racing promotions director for Bakersfield’s NASCAR track – and in between tested out many learning positions on nonprofit boards.

I also learned to pay more attention to the details, but still didn’t realize how important my mother’s advice was until I realized a good editor could make or break a newspaper career – the career I finally chased after 2001 when we moved to the Central Coast.

I’ve been blessed to write for SLO County’s Tribune, The Sun Bulletin and Simply Clear Marketing & Media’s newspapers and magazines. I was even publisher of The Bay News for a time because I’d “…never done that job before” until it merged with SLO City News to create Tolosa Press. 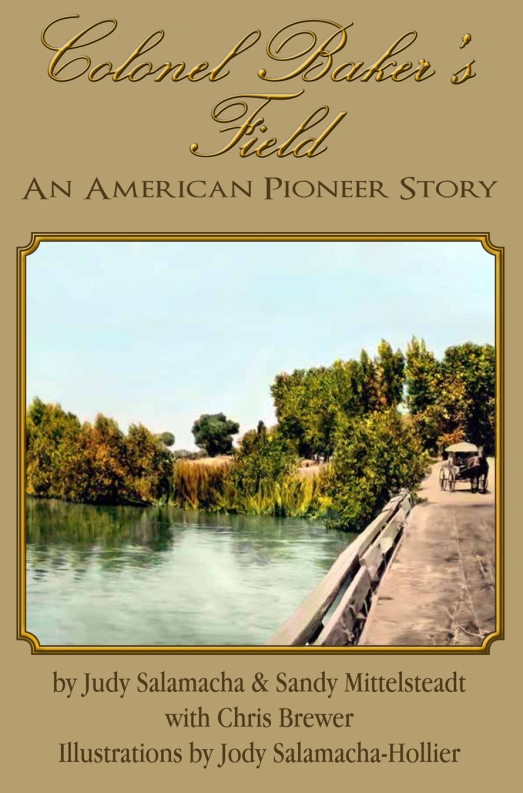 My favorite stories have always been discovering something few knew about people – telling their story – in fact, that’s how I stumbled into co-authoring the first and currently only biography about the namesake of Bakersfield, Colonel Baker’s Field, An American Pioneer Story with Sandra Mittelsteadt. No one had written this amazing pioneer’s life story although his great-great grandson, Chris Brewer, had done all the research and was willing to share it with two determined women get tell his story for the residents of Kern County and Visalia – and even Des Moines, Iowa. Brewer was willing to share many first source photographs that added to the historical quality and design of the book along with the exceptional artwork created by my daughter Jody Salamacha Hollier. Brewer was also a small press publisher (Bear State Books), a professional California historian and author of many California books.

From Chris Brewer’s vast collection of photography and first source research materials we were able to use in Colonel Baker’s Field: An American Pioneer Story — with a little restoration by Jody. Below is one of several B&W photos Jody “colorized.” 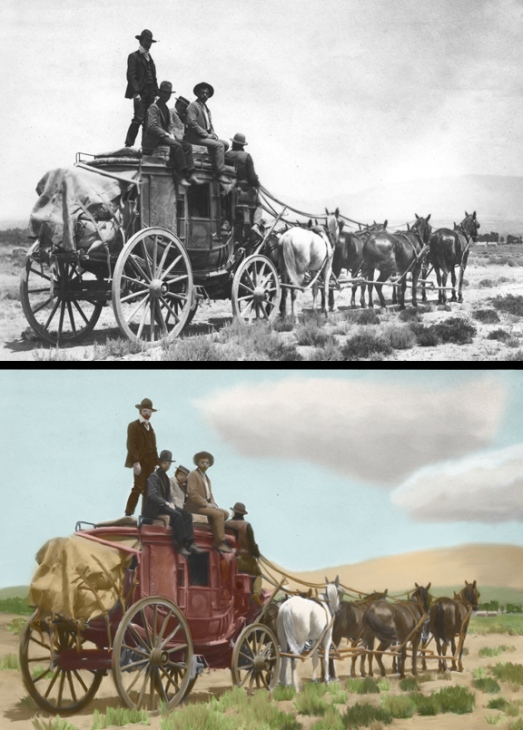 It is no secret I tend to do things back-ass-ward. I’m should have gone to Cal Poly since my career philosophy has always been “learn by doing.” I didn’t want to write a traditional biography or history book, I wanted it to read like a novel so on top of researching the content available, we had to learn to tell a story infused with creative license acceptable to a California historian and a great-great grandson sharing his research.

Publishing was easy, but writing what ultimately became a creative nonfiction narrative took four years, many trips to Bakersfield and Exeter for interviews, and untold calls and emails with my co-author and two editors — Plus the fun part – getting lost in the 1869 research. We had many false starts and I would still be revising if my co-author hadn’t taken it away from me. But sage advice at a Central Coast Writers Conference by Editor Jordan Rosenfeld was key to our success. She not so gently told us during a conference workshop we were telling the story not showing it. Aha! Her book Make A Scene gave us the tools to complete and publish our book.

Signing our book at Russo’s Book Store in Bakersfield was always a great marketing opportunity for Sandy Mittelsteadt and I.

But then we had to market it. Today we’re lucky enough to be in our 2nd printing. We listened to many who purchased the first edition and told us the book needed to be in the schools. Before we ordered the 2nd print, we worked with community sponsorship to fund 1200 additional books for Kern County/Bakersfield middle school classrooms.

What are the tricks to marketing a book? Frankly the only marketing benchmark we found effective was to find the right audience to tell your story and the audience will buy the book – one or 10 books at a time.

So why do we write? Each year while directing the Central Coast Writers Conference someone would announce, “We write because we have to.”

I don’t believe that anymore. We write because we make a determined choice to write – a good story percolating in our brains, a commentary on the world’s condition, a biography of someone who needs to be remembered – sharing our own insights in our memoir for our children, our students or maybe posterity.

When do we write? No matter how busy we are with our daily lives, we carve out the time to write when we are passionate about what we want to say – or we have a deadline!

And how do we become passionate enough to force us to carve out the time to tell the story or offer a commentary? Staying close to those who will teach us more about our craft is critical. Being in the presents of other writers, attending workshops and reading the works of other writers to broaden our perspectives will provide the examples we need to encourage us to focus on our own writing. Better yet learn and write then share what we have learned with our peers and share our drafts with a critique group that will give us honest feedback and motivation to continue our work. 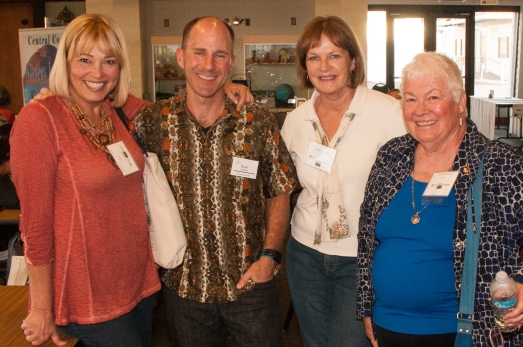 Catherine Kornreich, Brian Schwartz, Debbie Black and I at the Central Coast Writers Conference. We are the Critikis minus Susan Vasquez who was world traveling doing her research!

Already published before we worked on Colonel Baker’s Field: An American Pioneer Story, my co-author Sandra Mittelsteadt’s answer to those who say they always wanted to write, but…She will say, ”The only difference between you and me is I wrote the first word.”

A Central Coast friend and fellow writer Anna Unkovich said, “I believe that we’re in our most blessed, joyful, and peaceful inner place when we’re in a state of creativity.”

A favorite movie quote is from chick-flick Up Close and Personal. Michele Pfeifer’s character — reporter Tally Atwater says, “What we in the news business can never forget is that we are only as good as the stories we tell.”

I think the quote that is spurring me onto whatever new pathway in my writing career I seem to be chasing comes from Jane Goodall, ‘You’re never going to win an argument appealing to a person’s head. You have to change their heart.”

In today’s world, there is certainly reason to change hearts. As writers, I believe we can do that.  But if writing is simply a personal endeavor that helps you get through the day or might show the next generation a “slice of life in 2019” that’s perfectly okay. Gloria Steinman’s philosophy is probably universal for most people who love to write. She says, “Writing is the only thing that, when I do it, I don’t feel I should be doing something else.”

And as my favorite interview ever!!! author Bertha Tyler taught me to say, “Thank you, thank you, thank” because that’s what Dean always said to her. Bertha is a restauranteur — the Chat ‘n Chew of Morro Bay, co-owner with husband Dean of the Morro Bay Aquarium and the most positive person I know — and first time author at age-92.