World War II veteran, Walter Stacy, just returned from a whirlwind tour of Washington D.C.’s monuments honoring our nation’s veterans. He was hosted by Honor Flight Network and traveled with his son, Richard Stacy. The nonprofit organization, www.honorflight.org, intends to host all living veterans. “Once they find the WWII vets,” said Stacy, “they want to find the Korean Vets.”

Now in their 90s, Walter and Doris Stacy will participate in the Lost at Sea Memorial ceremonies Monday, Memorial Day , 2014, at 2:45 pm at the Cayucos Pier Plaza. The service honors all those lost at sea, military or civilian. It is supported by the Cayucos Lions and Rotary Clubs of Cayucos and Morro Bay.

“I wanted to fly so enlisted September 28, 1942 when the Navy created the VT-5 flight training program. They needed pilots,” said Stacy.

Every three months he was moved. He trained in navigation in Massachusetts, flight training in Tennessee, ground and physical training in Georgia, flew “yellow perils” in Texas and finally got his wings August 8, 1944 in Pensacola, Florida. A member of the Dive Bombing Division (SBD), he was “carrier qualified” at Glenview Naval Air Station in Illinois.

Doris, today recognized as a Rosie the Riveter, trained as a sheet metal worker in Springfield, Massachusetts, then was stationed at Bradley Field, Connecticut. “I was a WAM (Women’s Aircraft Maintenance Squadron). We fixed the planes as the men damaged them. I made $1060 in 1943. My point is every one of us filled a space for the men who went to fight the war.”

“I called Doris and asked if she still wanted to get married before I got my orders,” said Stacy.

Their extended honeymoon was searching for Stacy’s VFZ carrier-based squadron. “When we got to San Diego, the Navy told us to come back in five days. They couldn’t find my squadron. When we came back they sent us to Seattle, then Pascal, Washington, and after a month back to San Diego.”

Eventually Stacy was shipped to Hawaii and Doris returned to New Hampshire pregnant with the first of their two sons. Stacy flew F4U-4 Corsairs — bombing, strafing and searching POWs out of Saipan’s Kagman Airfield. The couple agreed “it was a happy day when the skies lit up with bombs and we (Stacy’s squadron) found out the next day the Japanese had surrendered.”

After his carrier picked up 1,500 men caught in a big storm off Okinawa, Stacy returned to San Diego December 13, 1945. He retired as a commander after 26 years from the Naval Reserves while working for New England Telephone for 38 years. Now Cambrians, the flyboy and his war-bride will celebrate their 70th wedding anniversary December 1.

Another note, I talked to Trudy O’Brien, Morro Bay Fisherman’s Organization, on KEBF Estero Bay Community Radio about her participation at the Cayucos Lost at Sea Event. She has carried the Memorial Wreath for 8 years because she loves the event and the position she plays. The wreath is so large she always selects a fisherman to help her.

I also talked to Mike Elliott, General Manager of the Los Osos Valley Mortuary and Memorial Park, which has presented a huge Memorial Day event for over 50 years. All services are represented and they have created an amazing aerial with all kinds of para-things falling out of the skies…plus music, bbq, Viet Nam Vet Peter Starling speaking. It all starts at 10:30am.

If you miss it this year mark you calendars to be in Los Osos and Cayucos same time next year. These tributes are exactly the right message 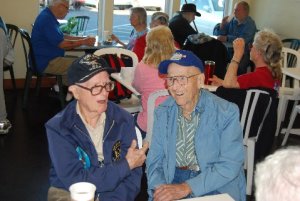 why we celebrate Memorial Day.

This is not Walter Stacy although Walter is often with this group of Veterans that meets every Friday at La Parisiene Bakery in Morro Bay off of Front Street on the way to Morro Rock…This is Cayucos Senior Member Hank Hall and a veteran friend.